"The master in the art of living makes little distinction between his work and his play, his labor and his leisure, his mind and his body, his information and his recreation, his love and his religion. He hardly knows which is which. He simply pursues his vision of excellence at whatever he does, leaving others to decide whether he is working or playing. To him he's always doing both." — James A. Michener
I never got to see the process of learning to read with Wyl. I know I tell this story all the time, but it is *so* important to our unschooling... I had grand plans of homeschooling Wyl's beginning reading... From the time we were considering homeschooling when he was 2-ish, I had visions of bright colored crayons, that manila paper with the red and blue dotted lines for beginning writers, letter charts, sitting with him at the kitchen table (yeah, I hear some of you laughing out there! It's all *true*!), working patiently, *teaching* him his letters, how to write, and eventually how to read. I had thoughts of Dick and Jane books, hours spent benevolently sharing my knowledge with my dear, firstborn son... just he and I... Well, of course, with my own schooling ideas having never been challenged, I figured those things would start in our homeschool Kindergarten year, which wouldn't start until September the year he turned 6, according to our state laws. Wyl wasn't having any of *that*.

I had loved (still do) reading to him... Dave started reading a little book to him every night when we found out I was pregnant. Every night, Dave would lie his head on my belly and read a little Dr. Seuss or some other children's book. Then, after the upheaval of new person in the house, we started reading again when he was several weeks old. Dave or I, every night, reading a little something. I think Dave felt it was more of an obligation, something that needed to be done like changing diapers. :~D So, as the books got longer and with less pictures, Dave read less and less. When Wyl was 5, I had been the only one reading for some time. We were still reading every night, and about the time he turned 5, we were on the Laura Ingalls series. I had always loved reading books about kids my age, and Little House in the Big Woods saw Laura at 4 & I think she had her 5th birthday in it as well. It's been a while. I forget. :~) So, one night, we're lying there in bed, reading and Wyl says, "Let me see that a minute", gesturing for the book. I hand it over to him and he proceeds to read several paragraphs, without stammering or struggling except on an extremely big word or two, then hands it back and says, "Okay, that's all I want to do. You read, now." Wow. I mean, I know he'd been reading "dairy" and "cheese" and things like that at the grocery store, and "stop" on the stopsigns and such, but it never happened how I had pictured: small, simple sentences at first, sounding out words, slowly getting longer and longer sentences, more complex and multi-syllable words... no. Wyl got a basic grasp, then he did some sort of processing in his head, and *boom*, he was *reading*. Fumbling blindly with my concepts and ideas for a bit after that, I bought him a Dick and Jane compilation book, which he enjoyed (I think he found it kind of weird and comic), but really, he pretty much went from 0 to 1st grade readers instantly. At least externally. I have no idea what went on *inside* his head. :~)

Which is why Storm's process is kind of a retro-thrill for me: I get to SEE it happening! Wyl knew his alphabet entirely (from the song and recitation) by the time he was 2. With Storm, I've gotten to see, "Hey! That's an 'H'!" and other letter recognition. Questions, too - Wyl 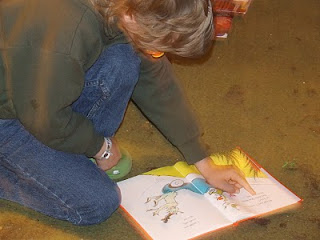 never asked much questions, but with Storm, the process has been a sharing of knowledge. Storm very clearly uses phonics. We never used any phonics books or games with him, though Sesame Street does use a bit of phonics, but Wyl watched *far* more Sesame Street than Storm ever did. It just is how he processes the information.

Storm went through a little disappointment period a while back: he was upset because he "couldn't read". He lives in a house with readers: 2 adults and a brother 5 1/2 years older who's reading at or near adult level. No wonder he felt "left out". I tried to assure him that he would read when his brain was ready, but that clearly wasn't what he needed to hear... he was still upset. He had already recognized word-symbols like Wal*Mart and Lego and Sesame Street, so I sat down and wrote some words I knew that he recognized and some I thought he did: Mama, Wyl, storm, WalMart, cat, etc. He did recognize one or two and I helped him figure out what the others were and that seemed to satisfy him. *I* believe(d) that his beginning reading process was already started, and that he was "reading" in a beginning fashion, so maybe that helped: because I believed.

I ran across that page in the notebook recently, and he knew more of those words, and the others he surprised me by sounding out! We'd not done any of the "S sounds like ssssss" kind of thing, so I thought it was really cool that he'd picked that up.

(Storm "reading" - sorry it's so dark!)Storm's not as fond of reading *every* night, and Wyl and I are kind of on a summer hiatus with reading: we have other things to do in the warm weather besides curling up with a good book, and we can't really decide what we want to read next. SkippyJohn Jones got Storm more interested in reading at night more often, but he's far from an "every night" kinda person. Bummer. Sometime in the last few weeks, I'd *finally* gotten him to okay me reading Dr. Seuss' ABCs: a book Wyl adored when he was younger; so much so, I have it memorized. :~D I'd been asking and asking Storm if I could read it to him and he kept saying no. So, one night I said I wanted to read it very bad, that I hadn't read it in a long time and I liked it: would he mind if I read it out loud to *myself*? Well, he was okay with that, and let me read it all the way through. I'm really glad, because now *he* likes it, and has requested it very often, since!

Tonight, Wyl was snuggling with Storm before we really got down to the sleeping part, and Wyl requested a book. There was some debate, because Wyl wanted to hear SkippyJohn Jones, but Storm was resisting. Dr. Seuss' ABCs was suggested by one of them and they were *both* happy to have that as the choice (just as I was about to offer to read 2! :~) ) and that *really* made me smile: my 11 year old still wants to hear me read Dr. Seuss. :~) So, somehow, in the last few readings, we've started naming our *own* things we think of that start with the letter we're on. Storm likes "apple" for A... not surprising, as he loves apple slices. He is amazing me with his grasp of "beginning letters"... last night, when we finished "ear, egg, elephant", he thought for a moment and said, eight. "Wow!" I said, "That's right! That's really good, because 'eight' sounds more like it starts with an 'A'!" I was really stunned that he knew that! I know, I shouldn't be, but like I said, this external process is new to me. :~) He really picked out some good ones in the last couple nights, amazing me with his grasp of "C" vs. "K" and "H" sounds, too. I even goofed on "N" and said "knee" and then realizing my mistake, switched to "knuckle". LOL

I'm so glad I was able to reassure Storm when he had concerns and he was able to go through his process in his time and his way. It still amazes me to see it: kind of like taking the back off of a winding-watch and seeing it move and work while you're watching. So fascinating and cool! Storm's always been a cautious, feeling-his-way kind of person, until he's comfortable with the parameters and knowing, from his own exploration, what can happen and how it works. So, I guess it really shouldn't surprise me that he tends in a phonics, sounding-out kind of direction. Seeing it all unfold sure is wonderful, though... It makes me excited to see what's coming next!
at 7/17/2010 12:43:00 AM

Labels: Getting It, I LOVE unschooling, Reading