I started discussing this on Facebook, then realized my kids both have accounts and could possibly run across what I was writing... ! If they know about my blog, they don't know how to get to it. I think.
Storm's tooth has been loose for a few weeks, now. We've been keeping an eye on it. Not very loose, but last week, it got a bit wigglier. Tuesday night, after his teeth were brushed, we noticed a big difference in the movement - it was really loose! Wednesday afternoon, he'd come to me occasionally with how wiggly it was, testing it, chatting casually about it and really just touching base with me about his tooth. Toward late afternoon, he was wiggling it a lot and I jokingly said something about him pulling it out. He immediately grabbed it with his index finger and thumb and... well, anyone who's ever tugged on a slippery, smooth tooth knows how well that works. I offered the information that he could use his shirt tail for better grip, if his fingers were slipping, if he wanted to. He had a hard time getting his shirt in his mouth and something caught his attention and he was off.
Now, mind you, in all these weeks - heck, all his life - we've not mentioned the Tooth Fairy. I had issues with TF (as I've been calling the Tooth Fairy this week) when Wyl was little, but overcame those with good advice and wonderful stories from other folks. Since we've come to a more balanced, trust-based relationship with our kids, I've also quit telling them all about things - especially legendary things like Santa, TF, Harry Potter and Hogwarts, Thor, etc. I like to answer questions they have with "What do you think?" And wait for more specific questions for which they don't have an answer or opinion before I give information. Even then, I like to give general information and include lots of different things I've heard, so they can decide what to think, what to believe.
Wednesday night, right before heading up to prep for bed and snuggle together for sleeping, Storm was coming in from the little pool we put up in the back yard, shivering, and talking about his tooth. He said something about wanting to pull it and I suggested his towel. I think the towel was too big. He couldn't seem to get a grip on it. He turned away and a moment later he was quietly saying with wonder, "My tooth is out!" (Again, SO different from Wyl - my oldest would have been shouting and yelling and giddy. :~D ) He had been wiggling it back and forth and it just popped loose! He inspected it. He gave it to me to inspect while he felt the hole in his mouth. He showed his brother his hole and his tooth. He showed Daddy his tooth. He brought it to me and said, "We need to put this under my pillow tonight for the tooth fairy!"
Uh... Okay... ! So, I'm scrambling to figure out how (since it has been a few years since I last had a tooth under a pillow to deal with) much the going rate is (posted to Facebook), trying to find the half dollars and silver dollars I had stashed for Wyl, while Wyl is kindly helping Storm get ready for bed. I'm thinking I *have* to do this right after he falls asleep, or I'll forget! Which means, I need to find the stuff and take it up with me, in moments... 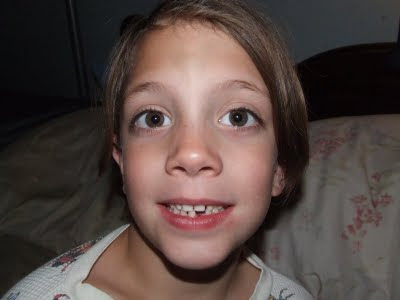 In the middle of my scramble, Storm comes down and says he doesn't want to put the tooth under his pillow tonight, because he wants to keep it for a while more. While I'm relieved I have some extra time to work it out, I'm also intrigued. I don't think I would have thought of that, as a kid. Things were done by a certain structure and with specific rules and I learned to know those rules and follow them without question, so I didn't miss out on anything.
We talked today (thanks, Meredith!) about where he learned about the tooth fairy, what he knew (he thinks the tooth fairy "... brings random amounts like $20.58 or $50.10" I'm not sure if he thinks it is actually that *high* of an amount, or if he was just using nice, round numbers to clarify the change... We talked about what she wore, if she had a wand, if she had wings, if she glittered... I loved hearing his take on the TF! He told me he wanted to write a note to TF, telling her he wanted to keep the tooth for a while, and at first, I thought the note was a "substitute tooth", where he'd put that in place of the tooth and get his money. As I talked with him, though, I got this urgency feeling - like he felt he needed to let her know before it was "too late"... like there was a deadline. He also wanted to leave the tooth *in* the envelope with the note as "proof" that he'd lost it, and wasn't just writing a note to get money. I *really* don't know where he got that idea... I told him that he was an honest person and I'm sure the TF would believe him, but he could put the tooth in there, too, if he wanted.
So, tonight, when it came time to write the note, he told me he decided he wanted to keep it another day. (He loves that tooth! He loves the hole in it and the bloody stump and everything! He is amazed by it and really thinks it is cool... ) So, we wrote a note (he dictated, I just moved the pen):
"I lost a tooth but I have decided to keep it a day longer and I hope you trade it in for cash like you're supposed to , if you are real.

And I hope you get this.
FROM STORM
TO Toothfairy"
(The all caps are his writing) Then, he put "FS" on the envelope and told me, "That means 'from Storm'" and zipped upstairs to put it under his pillow.
I brought the note down with me, after he fell asleep, because my memory is pretty bad, and I wanted to answer it, but I left the envelope under his pillow, just in case he woke and felt for it. :~D I put together 2 brief rough drafts, trying to disguise my handwriting, then the one that was supposed to be the *actual* note, I wrote too big on and ran out of space, and then reverted to cursive on the last word, so I had to do it over. :~D I settled for plain, white paper with purple marker writing... but I REALLY wanted to go all out, with purple paper and glitter and stickers and beautifully printed font... Ahh, alas... the disappointments of a procrastinator.
Anyhow, I replied (in beautiful purple marker and handwriting from my teen years - minus the circle-dotted "i"s... ):
"Dear Storm,
Thank you *so* much for your note! I am happy you'd like to keep your tooth for a while longer. I like teeth, too!
If you ever decide you don't want your tooth any more, you can give it to your mama and she can figure out what to do with it.
From ToothFairy"
Then, on a different envelope (why don't I have purple envelopes?!), I put FTF. :~D We decided on one Susan B. Anthony silver dollar and one presidential gold dollar. Still coins, yet more than a quarter.
I really love doing little things like this for my kids. I don't really know if they enjoy it or not... I don't know if it will ever be one of those "keepsake memories" for them, as they get older... But, I enjoy it. Even if they don't enjoy these little things individually, specifically, they are all small ingredients in a happy childhood, a happy life. I like butter in my chocolate chip cookies and a bit of salt. I like to add coconut, chopped nuts and bourbon vanilla. I like to make sure there's a *wee* bit more chocolate chips than the recipe on the bag calls for. Some people notice, some don't. I do it because I like to, and because I like them that way. :~) You could probably leave that teaspoon of salt out of the chocolate chip cookies or use vanilla flavoring instead of extract or use shortening instead of butter and they'd still be good to eat. But, little snippets of this and that can make what would be a regular cookie into a wonderful, delicious experience that makes someone say, "Wow! I had a wonderful cookie! I don't know what was in it, but *man*, it was great!" My kids will know they had a great childhood. They may not be able to pick out the specific little tidbits or ingredients that made it so or they may; it doesn't matter. The "what" is vastly more important than the "why", for me.
at 7/29/2011 01:45:00 AM

Labels: Getting It, I LOVE unschooling, Philosophy 101, Sentimental

Why won't blogger let me color different parts of my post in different colors? I wanted to put Storm's note in black and TFs note in purple, but it wouldn't do that... :~/