To be nobody but myself -- in a world which is doing its best, night and day, to make you everybody else -- means to fight the hardest battle which any human being can fight, and never stop fighting. -E.E. Cummings, poet (1904-1962).
..
Have I mentioned I love Unschooling? Some days just are such an example, I kind of wish I had someone I needed to convince, since I now have "proof".
.
The boys and I were at my parents' house today, having eaten then run about the yard then played with the giant frisbees with Grandaddy, they settled down a bit to more detailed activity. We were gathered on their back porch, my mother working on finishing details of the shorts she had sewn the boys, my dad and I were talking. Wyl found some small and medium boxes Grandma had sitting around for disposal and immediately set 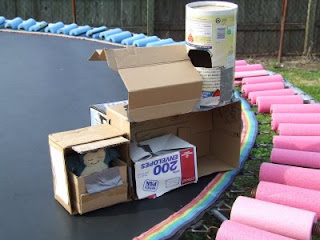 about gathering scissors, cellophane & duct tape, marker and other odds and ends from Grandma, and set about making some furniture 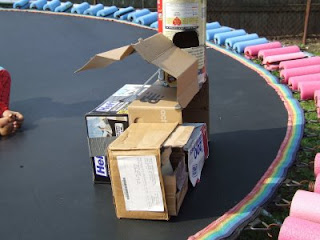 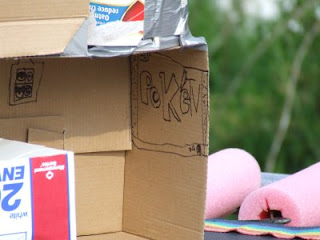 and dwelling areas for his Snorlax Pokemon. Gee... I wish I'd have gotten a 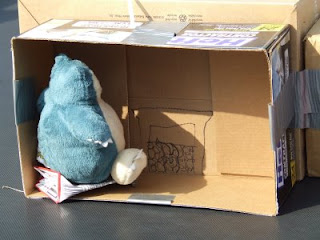 picture in the afternoon sun! After the handle broke off the big pair of scissors Wyl was using, Grandma got out her small knife (Exacto knife? Stanley knife? not sure what is "common" vernacular...)
and Snorlax at fireplace following-note tiny
bit of chimney at top of picture, please vv) 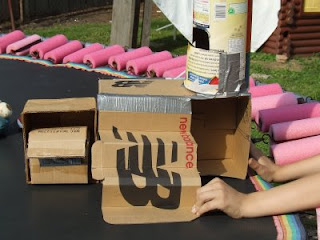 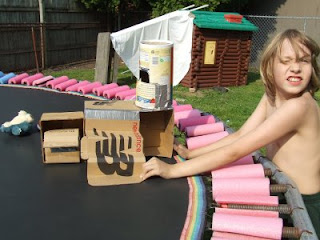 and took direction from him, cutting out parts from a giant oatmeal cardboard "canister" and various boxes. 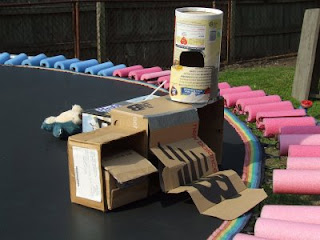 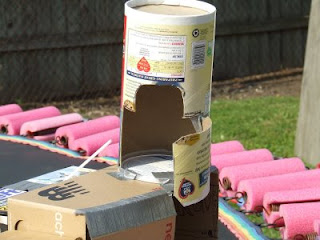 It took Storm a bit more "energy expenditure" to settle down to something more finite. With my kids, they seem to have HUGE amounts of almost-volatile energy that cannot be contained. They have an almost endless supply of this energy. It takes a *lot* of large body movement (running, jumping, climbing, trampoline), loud voices and big body gesturing (kicking, punching, arm-waving) as well as creative thinking All At The Same Time to seemingly "convert" that energy into a more channeled, finer-dexterity, precise-creative-thinking mode. And it doesn't last for long. Apparently, it builds up while they're in a "smaller movement" mode and soon they're up and off again. Even after 10 years, it is still *amazing* to me how *much* energy there is contained in such a small-ish person. I can't even imagine that much energy in an Andre the Giant-sized person!!! It seems to be many people's worth of energy. It makes me think of the big bang theory, with the big release of pent-up energy before things whirled down to a more "organized energy" kind of existence.
.
At any rate, Storm is still very much a "large energy" kind of person. He may always be... So, it took him a little while longer and a lack of another "big energy" person along side to refocus in a more finite way. As he slowed, he saw a 30' tape measure Grandad had left lying near the back porch. He started to pull the tape out to play with it when I reminded him that he should probably ask the owner of something that didn't belong to him. My dad is very particular about his tools, so I was concerned Storm would need distracted into another interesting item, and I watched as he took it over to my dad and asked if he could play with it.
.
My dad asked him what he wanted to do with it. I figured he's 4, he didn't really have a plan, but he thinks quickly and he decided he wanted to measure himself. Grandad cajoled him out of the tape measure, telling him he "couldn't" measure himself, as the tape was above his eyes and he couldn't *see* it. It almost turned into an argument, but Storm seemed to decide that he'd rather have what time he could wrangle with the tape measure rather than risk Grandaddy taking it and putting it away because Storm wouldn't "cooperate". Grandad measured him and told him he was 46". Storm wanted to see. Grandad held out the tape and showed him where the 46 was and Storm seemed pleased with that. He suddenly decided he wanted to count it. I've heard him count to 10 and heard him try to count through the teens. Those darn "11" "12" and "13" are just out of place! They don't sound like anything else (okay, maybe thirteen... but still... three = thirt-?") and they've given both my boys trouble. But, we've not pushed or quizzed on counting and so that was the scope of my knowledge.
.
He started out at the end and began, "One. Two. Three...." all the way through ten and as usual, skipped over 11, 12, 13. So, my schooled-logical mind has assumed that because he "can't" or isn't counting 1-20 by each number in its place, that he isn't yet able to count higher than 20. Durn school-thought.
.
As I said, he skips from 10 to 14 and goes on through to 20, where I didn't think he'd go beyond. What do you know? He didn't even *pause*, "Twenty-One. Twenty-Two. Twenty-Three..." my focus sharpened. What would happen when he got to 29? Well, duh, Mama. Next is, "Thirty." I had no idea. He kept going. He got a bit stuck on 50, not knowing how to pronounce it, but seeming to know that "Five - tee" was not right. I asked if he needed a little help. "Yes, Mama, please." I told him "Fifty" and he was off for some more. He needed a bit of help on 80, then I held my breath as he got to the end of the 90's. No pause, "Ninety-nine. One hundred. One hundred One. One hundred Two...."
.
I'm astounded and holding my breath!! He got up to 109 and needed help. Grandaddy held his finger over the first one and asked what he saw and he said, "Ten" and then Grandad took his finger away and he seemed to be puzzled and Grandad started to quiz him some more, but I just said, "One hundred ten." He half-heartedly tried to go up into the mid 120's, but I could see his concentration wasn't as intense and he was pretty much done. He moved on to pulling the tape and trotting off into the yard while Grandaddy held the base and then Storm would run the tape back up to the porch while it slid inside. (That never gets old, does it? :~) )
.
We hadn't found Unschooling when Wyl learned to count to 20 at 2, so there was a bit of prompting, and encouraging and some quizzing with number puzzles and magnets. Not a lot and not to the point of frustration (at least that I could tell or can remember), but it was not the Trust and Unschooling Storm has had. I didn't know he could count beyond 20 and it didn't even occur to me to wonder if he could or couldn't or if he "should" be able to. It just *Is*.
.
My kids surprise me a lot with stuff they know that I didn't know they know. It's fun and astounding to find out. "Wow, I didn't know you knew that! Where did you find that out?" Sometimes, Wyl even knows stuff I don't. When I first considered homeschooling, that concept horrified me-how could I teach someone stuff I don't know?? But now I think it is so cool! I can learn *more*! My kids, or at least *Wyl*, doesn't think it's weird or shocking that he knows something I don't-he just gives me information he has, just like Dave or I give him information we have. He doesn't have a second thought of asking questions of someone he thinks *might* have the information he seeks. I was often embarrassed or felt "little" to ask a parent and most certainly to ask a teacher in front of the whole class, something that *might* get me labeled "ignorant" for not knowing. Being laughed at for not knowing, for *having* to ask is pretty close to the (if not *the*) ultimate shame. I'm *so* glad my kids don't know what that feels like!!! They get to use *that* energy on creating Snorlax houses or counting the inches on a tape measure or bouncing on a trampoline or spinning in circles with their arms flung wide... Or saying for the 40th time that day, "I love you, Mama!" or "Unschooling is the BEST!" :~)
at 6/07/2009 12:23:00 AM

Labels: Getting It, I LOVE unschooling, math

I just read this article today and thought it would suit this entry perfectly!:
http://www.psychologytoday.com/blog/freedom-learn/201004/kids-learn-math-easily-when-they-control-their-own-learning