"There is no single effort more radical in it's potential for saving the world than a transformation of the way we raise our children." Marianne Williamson

I joined Unschooling Discussion *right* before St. Louis... I probably could have scrambled and gotten in (and it was the closest one to us!), but I didn't feel that we "could" go, being as we weren't fully committed to unschooling and we definitely weren't radical unschoolers. Ah, to have gone to a Live & Learn conference back then... Ever since, I've been interested in going-since Albuquerque, I've wanted to make it *sooo much*! It had become this Mecca, this pilgrimage in my mind. The place where, if I could just make it, I would then be A Whole Life, Radical Unschooler. :~D Well... until this past year or so, when I really seemed to find my groove. Not that it diminished my desire to be at L & L with other unschoolers, day in and day out for the better part of a week... In fact, when (during the last month leading up to 2008) money was so tight, I wasn't sure if we'd have enough money for gas for the trip and food on days we didn't have the BRA cafeteria to rely on, I was afraid to get excited about the trip... Afraid that it wouldn't happen and my disappointment would be to huge to deal with rationally. (Obviously we *did* make it, thank goodness). I had 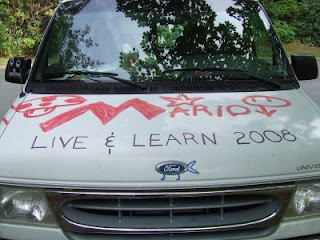 thought our tax stimulus would cover things, and it did up to a point, and then we had to dip into the remainder because of stuff that came up. Ugh. It happens too often for my peace of mind.

So, when it was clear (a couple days before departure) that we *could* actually make it 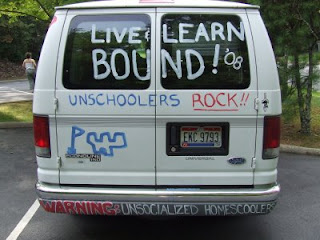 (can you imagine having all the room, food, shirts, con- ference fee, etc. all paid for and not be able to make it because you didn't have enough GAS?! Ohy...), we had SO much fun decorating the van for the trip! It was hot and sweaty, but there was so much Joy in the whole process-even when I misjudged my back bumper and the whole "Warning: Unsocialized homeschoolers on board!" wouldn't fit, and I washed it all off and started over again. It worked out well, anyhow, because the red didn't show

up on the gray so well to begin with, and I had the idea to leave a bit of space and outline it with white, and that just made it *pop*. Cool. 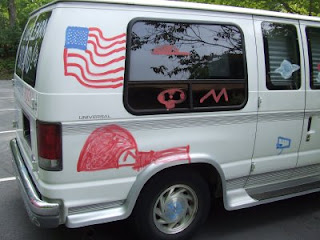 Wyl did the Super Mario stuff,
including the mushroom, star and fire flower on the wheels. 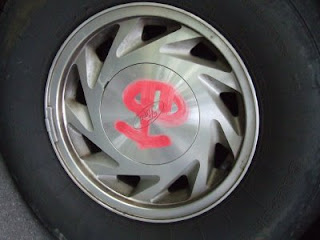 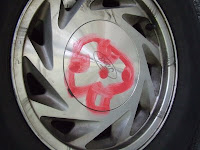 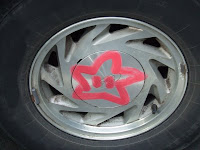 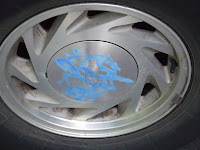 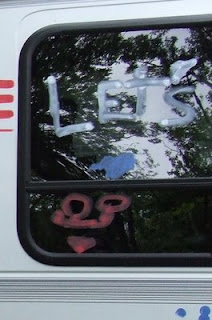 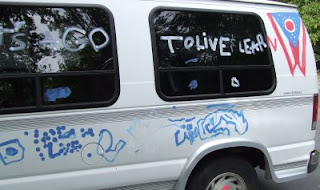 ^Storm did most of the driver's side behind the driver door just as high as his arms could reach! ^

Wyl thoughtfully wrote Storm's name on the window, since Storm isn't quite writing, yet. 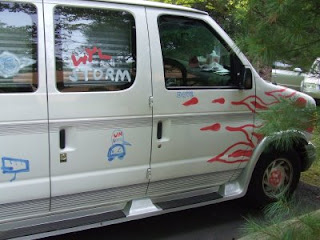 Dave did the flags and the flames. I thought the Ohio flag was a super-cool idea. We're also kind of state-proud that it is the only non-square/rectangle flag in the 50 states.

And I did the rest. It is kind 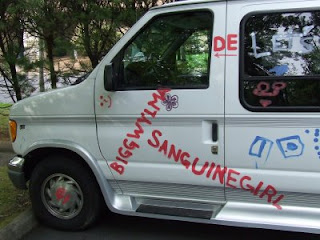 of addicting! I kept thinking of stuff
as I drove and kept adding when we
stopped. Two and a half hours from
BRA, as we left the hotel, I added my
screennames to my door and my emotie.
I meant to put this emotie as well
:~D
but the liquid chalk was running down the
car from having washed the sponges and
not drying them well enough, so I got
distracted and that was enough for me to
forget. LOL
(Oh, and as noted on the Live and Learn Yahoo group, the liquid chalk that is made for *windows* is rather permanent on that nice, wide expanse of white van. If you don't want your artwork and words permanent on the side of your vehicle, I would strongly advise not using liquid chalk! Someone who's used poster paint before reccomends that-says it rinses off in the rain.)

I packed too much. I always do. I'm so worried that the boys will run out of clothes (how could they? they rarely change clothes!), that they will get wet or muddy or some other sticky or dirty mess and need to change into clothes I hadn't planned for... When you don't have extra money for the laundromat, and you're far from home... well, those are the kind of things my brain chooses to latch onto. I often don't have enough clothes, but I packed lots of extra and I had *just* enough. Yay!! I will have *more* clothes, now, thanks to Robyn and her sharing of "reverse tie dying" for clothes that are solid, but "less than optimal" visually. Boy, do I have a LOT of those...

The trip itself was almost uneventful. When we started out, it was so nice and cool. Low 70s. Amazing how different the air is in the *morning* (us late night folks don't often get to experience that. LOL). We kept the windows closed so we could *hear* and that necessitated a bit of air conditioning to stave off the stuffiness and the sun shining in all those windows. Well, just over half way through the trip (well past Storm's average napping time), legs were needing stretched, folks were getting antsy and Dave and I needed a bathroom break. So, we pulled off the next place we saw - Virgina somewhere - (very aggrivating exit which advertized a McDonald's, but didn't say until you were already off the freeway/highway that it was a 3 mile drive with 4 turns to get to it!) and once we pulled into the parking lot, we were ready to get out! I had the boys grab a ball to go run in the grass, and opened my door to this huge oven-blast of *hot* air! That really surprised me. For one of the first times since Storm had gotten stung, he was too gung ho to go to bother with shoes (he'd been *very* insistent on always wearing shoes outdoors after he got stung twice in one day at Goodyear Metropark), so Dave grabbed the ball while I helped Wyl find what he needed and got my own shoes on and took Storm across a drive way to the farther-from-the-road patch of grass. Not 90 seconds after he got out of the car, there was a scream and yell-crying! At first, I thought he was just super-cranky from being tired and hungry, but it was just a moment before I realized something was up. The "something" was a *bad* bee sting! Poor little kiddo... we had used up my bee sting kit on his other two stings. I only got stung once as a kid (well, once in my life so far), Wyl made it to at least 8 before he got stung, and I just didn't expect so many stings in such a short time... He was inconsolable. I managed to comfort him down from ear-piercing screams (that had everyone looking our way) to wails and sobs and each breath was, "ow.ow.ow.ow.ow.ow.ow.ow" then a sob or a moan or a wail or a not-so-piercing scream. He wouldn't let us take the stinger out (though it came out somewhere along the way). He wouldn't let me blow on it. He wouldn't let us put ice on it. And by "wouldn't let", I truly mean he made sure it didn't happen! He was adamant. No hugging, no looking at it, no stroking, no kissing, no rocking, nothing. Dave took a turn at the bathroom which gave him time to chill and calm down, then while I took Wyl to the bathroom with me, Dave took over. By the time I came back out, he was calm. It was a long 10-15 minutes of severe upset before that happened. We got the fruit out of the cooler from the back, refilled everyone's water bottles when we stopped across the street for some more sting stuff, and headed back to the road. By the time we got up the onramp, Storm was asleep. I had settled into the passenger seat for a nap and Wyl was quietly drawing, so that was it for the excitement for the day!

The novelty of a borrowed DVD player took up a lot of time, and we planned the overnight stay *perfectly*. No one was over tired or sick of being in the car by the time we got to the Holiday Inn and we had plenty of energy to swim! Only one stop the whole day. The little potty came in handy, though. That cut out one stop. Dave made his wonderful bean and cheese and salsa burritos and we got to bed at a decent hour and were ready to go the next day. We made it up in time for breakfast *and* got on the road as planned!! A whole bunch of firsts.

We only had just over 2 hours left to drive to make it to the BRA and that was a nice late morning, early afternoon drive. We're so used to afternoon, evening events *and* we tend to be late, it slipped my mind that we had arrived an hour an a half before check in. Not only "not late", but *early*!!! So, I was a bit embarrassed when the staff at the check-in window told me I had to wait until 3 PM. I *knew* that, I just never figured it would happen that *we* would be early, so it wasn't in the forefront of my mind. :~D Well, after a trip around Ashville looking for the native American restaurant we wanted to try (and finding out they're closed on Mondays! LOL), we ended up signing in with no lunch, so we were *ready* for dinner when everyone headed to Olive Garden.

The picture is kind of a fallacy, because we *forgot* to bring our awesome door sign 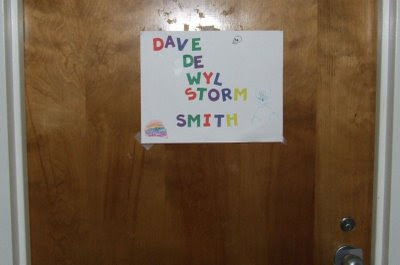 we'd made ourselves at Kalahari, and waited until the Wednesday funshop to make a new one. Then, we didn't actually get it put up *on* the door until late Wednesday or early Thursday... I kind of forget, since about that point, the days just kind of blurred together. LOL

That took us through the evening of Tuesday. That night was cool, but since this is so long already, I'm going to start the next entry with that. Gee, I didn't know it was going to run SO very long! Hope I'm not boring everyone... LOL Ah, well. It's my blog and my perogative. Besides, I'll never ever know if you skip around or jump ahead.